Growing up in South Louisiana gives a person plenty of opportunity to be exposed to snakes. Most people have an inordinate fear of snakes. I was no different in the beginning. In my preschool days I remember seeing a big one coiled up underneath our family automobile. I don't remember clearly, but I'm pretty sure I expressed some fear over the snakes that were around.

Some time after showing this fear my dad caught a small garter snake and approached me with it in a gentle and educational way. He showed me how to hold it and told me how to respect them and understand the difference between poisonous and nonpoisonous snakes. It was a good introduction.

He knocked the fear of snakes right off of me and I always enjoyed having a pet snake through the years after that even if it was just long enough to carry home and release in the garden where it can do some good. Like this common black rat snake I caught while mountain biking and took home. 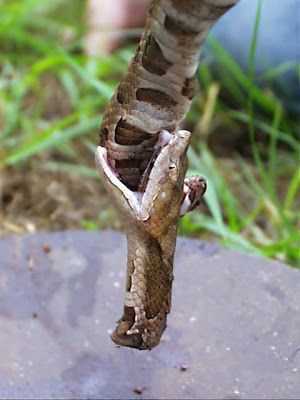 I don't mind catching a nonpoisonous snake whenever the opportunity presents itself. However, I have a healthy respect for the poisonous ones and give them their space unless they happen to be close to where kids might play, then I may help them on to the great beyond like this copperhead found in my neighbors yard. Notice that his head has been cut off and he is biting himself. A poisonous snake with his head severed can still bite for a long while after it has been cut off. Curious kids digging up a buried head have suffered snake bite after the fact, so if you dispose of one do so where kids won't get to it.

Simply killing a poisonous snake for the sake of killing it can garner you a stiff fine depending on where the killing takes place and who finds out about it. I heard a story about a man killing a rattle snake in the national forest and boasting about it while showing the dead snake off; fish & game showed up and wrote him a ticket for $300 dollars. Rattlesnakes do make good eating and in some places there is a rattlesnake round up every year.

I'm quick to catch a nonpoisonous snake, but I have a friend in South Louisiana that is known to jump out of a boat into the water to catch water moccasins. I went over to his house one day and he had two live ones in a burlap sack. I don't recommend doing this unless you really know what you are doing. Most snakes want to get away from you worse than you want to get away from them, but there are some exceptions. I've heard of female water moccasins with young chasing people.

There are only 4 species of poisonous snakes in the United States: Copperheads, Water Moccasins, Rattlesnakes, and the Coral snake. The coral snake's venom is a neurotoxin, and is the most deadly of the North American Snakes. Because of its size it also has the most difficulty delivering its venom. There is a Scarlet King snake that looks very similar to and is easily mistaken for a coral snake. King snakes are very beneficial. There is an easy rhyme to help a person remember the difference: "Red and yellow kill a fellow, while red and black is a friend of Jack". 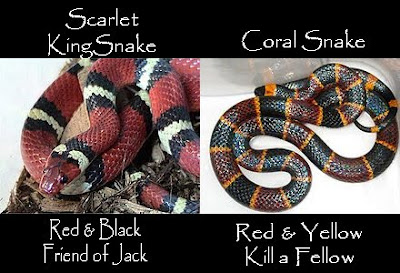 Coral snakes are pretty reclusive. I've only seen one in my lifetime so far. It was during basic training at Fort Polk Louisiana. The Drill Sergeant had us pickup an old rotten log to move. The log fell apart when we lifted it and revealed a coral snake living in its rotten interior. The snake quickly fled to safer cover.

Well, above is enough background info on snakes so now to my Tall Tale...

I worked on a 1250 acre soybean and cattle farm while I was in high school. My boss put in a twelve acre crawfish pond. Since I was not afraid of snakes, he gave me the job of running the traps.

The traps lay just beneath the surface of the water and were located by a small float attached to each one. I pulled a small boat behind me to hold the crawfish I caught as I waded the pond to check the traps. Two species of snakes were common in the pond: the banded water snake and gray water snakes.

It was a different story for the gray water snakes. They were larger and would always be trapped. If a trap was too deep beneath the surface of the water, I would pull it up and the gray water snakes would be drowned, dead, and soggy. I'd just dump them into the water for the crawfish to feed on. If the trap was shallow enough, these gray water snakes would have their head stuck through the wire sucking air. I would open the funnel end of the trap and grab them by the tail. Then I would apply steady pressure to pull their head free back through the wire. Once the head pulled free, I would pull them all the way out of the trap and start spinning them around.

I would check them when I first started the spinning. They would always have their mouth wide open and neck turned toward me in an attempt to get to me and bite. I would continue the spinning and occasionally check the color of their mouth. In the beginning of the spin their mouth was always white. It would gradually take on a red color as centrifugal force caused blood to go to their head. When their mouth took on a nice cherry red color, I would drop them into the bottom of my boat. They were so dizzy with all the blood that went to their head that they were quite easy to catch without getting bit. I would then put them into a special hardware cloth snake cage I had just for them.

Many people swore these gray water snakes were water moccasins, but they weren't. They have a thicker middle section like the poisonous water moccasin and tended to flatten out their head when agitated into a triangle shape common to pit vipers, but they were not poisonous. These were mean snakes though.

Many snakes when you catch them eventually warm up to you and you can let them safely crawl around and explore without being bitten. Be careful though if you ever take one from the shade into the bright sunlight or have something else stimulate them like the presence of food.

The gray water snake... It didn't matter how long you held them. They won't warm up to you. If you release their head they will bite you. Their agitation remains constant while in your captivity.

I had a couple of gray water snakes in my snake cage when I made my journey home one day. I decided to stop at the Rainbow Truck Stop bar to get a beer for the rest of my trip home. I decided to carry my snake cage into the bar with its two occupants. I walked into the darkened space and approached the bar setting my snake cage on top as I ordered a beer. An old women was sitting on a stool next to me smoking a cigarette and sipping a drink. It took a little while, but she finally noticed what was in the cage I set on top of the bar.

She said, "Boy! You're crazy! Those are moccasins! If they bite you, they'll kill you."

I looked at her and grinned as I said, "I don't care. For twenty bucks I'll stick my arm in the cage and let them bite me."

She said, "No! You'll take my money and get out of here before you die."

I said, "Look, I'll let them bite me and then I'll go run around the building three times and then come back for my money."

She still wouldn't agree to the deal, so I got my beer and left with my snakes.

Years later after getting out of the Army I went to work for PHI (Petroleum Helicopter Inc.) Kris Kristofferson who wrote and sang the song "Why Me" in the previous post also worked for PHI before becoming famous. He was also a Cobra Gunship Pilot in Vietnam. PHI didn't much care for any pilots showing up with guitars after their Kris Kristofferson experience. I heard Kris would get PO'd at them and just fly to the beach and play his guitar until he was ready to go back to work.

Anyhow, at this one job I had with PHI there was a large Black pumper named Perkins. The pumper position was a relatively senior job for an oil man, and Perkins always had a couple of roust-a-bouts in tow whenever he approached my helicopter for me to take him on his rounds. Whenever I saw Perkins approaching I would quickly turn my ADF radio to a black jam station out of New Orleans called: WYLD. The ADF was a navigational radio, but it could pickup AM radio stations and we usually just tuned it to our favorite station to listen to music while flying. Perkins would always sit upfront since he was the boss, and I would hand him the spare headset so we could talk and he could enjoy WYLD, which he did.

One day on my week off, so the story goes, it was Perkins birthday. Those oil men cornered that big black buck up in a little room on that oil rig and gave Perkins a paddling for every year of his life. Perkins was primed to return the favor when I returned to work.

My birthday fell during that hitch when I returned to work following Perkins spanking experience. I didn't tell anyone it was my birthday, but somehow they figured it out; probably through the dispatcher who was privy to more information than most. Perkins was ready to spank someone else, and it seemed I was the chosen candidate.

He cornered me up in a little room on that rig with 4 big white guys to help him out. There was nowhere to go and Perkins closed in close to me. I looked that big buck square in the eyes and asked, "Perkins, you like snakes!"

He said, "Ugh uh!" and wisely chose to leave me alone.

I often wondered how things would have gone down though if Perkins would have delivered my birthday spankings.

On my week off I would have returned to my high school crawfish pond and set a few traps. When I managed to capture me a couple of those biting mean gray water snakes, I would have took them back to work with me for my next hitch.

I'd put them in a burlap sack damp with water to keep them comfortable and leave them between my seat and door. When Perkins hopped in and got all comfortable jamming out to WYLD, I'd ask him, "Perkins remember when you gave me my birthday spankings?"

I'd say, "Well, I brought you a gift" as I'd take that burlap sack with my two friends in it and dumped them out on Perkins lap.

I figure one of two things would happen next. 1). Perkins would bailout three hundred feet above the water when those biting mean snakes landed in his lap, or 2). Perkins would have flat tore that helicopter up possibly causing a crash and ending both of our days. Regardless, justice would have been served.

I'm glad for Perkins sake, and mine that we didn't need to find out.