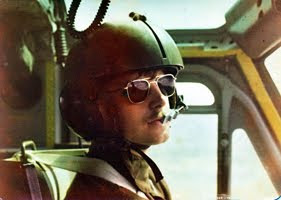 After my tour of duty in Korea I returned to Fort Rucker for remedial training... (Just Kidding). I was young in those days... I was sent to the Army Instructor Pilot course and became a school Instructor Pilot in:

You may get to pick some pine straw out of the skids when you return to base.
NightHawk
Introduces the pilot to "extreme" unaided night techniques.

This includes lowlevel autos to an unlit stagefield without the use of a landing or search light.

I instructed WOC Charles Hurt in "UH-1H Contact". He was one of my more memorable students. He was a big boy, and he was also a very good student, but he did have a couple of unforgetable and memorable moments. Prior to going to flight school he was an Army Crew Chief on the Huey Helicopter, so he had a fair amount of maintenance experience.

A "WOC" is what you throw at a rabbit... Naw, it's a Warrant Officer Candidate.

The 1st memorable moment...
Soon after getting him as a new student we are going through preflight and runup procedures. There is a place on the checklist that says, "Collective pitch friction off".

Candidate Hurt grabbed a fist full of friction and turned it for all he was worth before I could say anything. My eyes grew wide. I tried to see if I could loosen the friction after he tightened it. Being over tightened produced a potential critical situation because there is an emergency procedure for a condition called collective bounce where the pilot has to apply friction to the collective to stop the detrimental up and down bouncing effect if and when it occurs. The friction would not budge. I had to call line maintenance over and they had to use channel-lock pliers on the friction to loosen it.

The next memorable moment occurred at Skelly Army Stagefield...

As you can see on the Google Map, Skelly is just to the west of the Pea River a little bit south and slightly west of Elba Alabama.

Skelly had four lanes oriented North & South. The lanes you see oriented Northwest to Southeast were added sometime after I left the Army in 1979.

Hurt and I were doing lowlevel autorotations to the south on lane #4 closest to the river.


Our downwind leg was flown to the north over the river, then we turned west on our base leg and began to lose altitude. When we turned final we brought our altitude down to 50 feet above the trees until we entered the autorotation.

The practice autorotation is entered by lowering the collective to the full down position and reducing the throttle to the flight idle position. On a lowlevel autorotation you begin to decelerate the aircraft immediately upon entry to lose forward airspeed, then at approximately 10 to 15 feet you apply a slight amount of collective pitch in the upward direction to slightly check your downward decent. Then at approximately 3 to 5 feet you apply enough collective pitch to cushion the landing in a hopefully soft touchdown. Once you touchdown you maintain lane alignment and keep the collective up until the aircraft comes to a complete stop. Experienced pilots like to practice landing to a particular spot and terminating with minimum ground run. In initial training a good 20 to 50 feet of ground run is normal. The sparks do fly on a skid equipped helicopter.

I demonstrated a lowlevel auto to Hurt and then let him have the controls to try one of his own.

On any autorotation you attempt to touchdown in the first 1/3 of the runway and hopefully stop forward movement soon after.

Hurt did a perfect job except for one small factor. When he pulled his initial pitch he also leveled the aircraft by applying a very slight amount of forward cyclic. Leveling the aircraft will increase the amount of ground run, so it is not a good thing to do.

Hurt touched down beautifully in the first 1/3 of the lane right in the center with perfect lane alignment. But... Because he leveled the aircraft we were scooting down the lane like a bat out of hell.

Since everything looked good except for our excessive ground run speed, I decided to sit tight and see what Hurt would do and maybe let him scare himself a little bit. He maintained excellent lane alignment, but we quickly moved into the second 1/3 of the lane. There were no indications that we were going to slow down anytime soon. I saw the third 1/3 coming up.

You can see on the Google map that the center lanes 2 & 3 are wide lanes while the outside lanes 1 & 4 are narrow that terminate in a curve with section of pavement that connects the ends of all the lanes.

If we ran off the end of the lane at high speed that would not be good because the grass would grip the skids tighter than the pavement causing us to possibly tip over. I knew I had to do something as the third 1/3 approached, so I got on the controls and began to attempt a power recovery while scooting along the ground.

Power recoveries are pretty normal whenever an autorotation is botched prior to touchdown, whenever touchdown autos are not permitted because of company policy or insurance restrictions, or when practicing forced landings, but a power recovery while on the ground is extremely rare and this would be my first and only one.

As I took over the controls I began to roll the throttle back to the full on position. That made the aircraft pretty squirrely causing me to use some pretty delicate anti-torque pedal work to maintain lane alignment. As we entered the curve at the end of the lane I managed to get the throttle to the full on position and pulled the aircraft off the ground and stopped it in a hover.

Hurt looked at me shaking his head as he said, "Dog gone Sir! I was wondering how you were going to make that turn at the end of the lane!"

I looked at him and replied, "Me make the turn? It was your maneuver!"

He learned a good lesson about leveling the aircraft at the bottom of an auto and enough was said by the experience.

While many students just blend in and are forgotten I always remembered Hurt because of those two events.

Years later I returned to Fort Rucker as an Instrument Contract Instructor Pilot. (Those guys are civilians, but usually have some good military experience)

I was sitting on the couch in Carins AAF operations waiting for my students to file their flight plan when a man entered the room and was staring at me like he knew me. I looked up at him and didn't recognize him from Adam so I looked away. Then he pronounced my last name correctly, "Mr. Row-Bear?"

My name is spelled like Robert but is pronounced "Row-Bear". I explain it to people as something that happens to those of us born south of I-10 in Louisiana, but I tell them we do it for a reason... Because when the phone rings, we want to know if the person on the other end really knows us or just wants to sell us something. It gives others an advantage too. I may not remember you from Adam, but if you pronounce my last name correctly then I know you know me from somewhere.

When the man pronounced my last name correctly I got up to see where he knew me from. He said from Contact training. I asked him if he was one of my students. He said no, but he remembered me as one of the instructors. I then asked him if he knew who my students were and I mentioned Hurt. He said, "Yep". It was Hurt. Then he gave me the sad news about Hurt getting killed while doing a maintenance test flight in the Sinai. His aircraft chucked its rotor-head.

I sure hated to hear that. Hurt was a good man and a good student. Nobody is promised tomorrow and you just never know what will take you out and when. I hope Hurt finds it agreeable to him on the other side of this gift we call life.

You can find CW3 Charles N. Hurt listed on this website Search for or scroll down to "Egypt".

We miss you buddy, and hope to see you again sometime on the other side.

Well, there's my tall tale for today. Sorry I missed a few days. It's been a little busy around here, but all good!